How to strive for innovation?

The goal of this year’s TIME Economic Forum is to introduce new line of thinking about the future of our country and the society’s welfare. The subjects brought up during the Conference will be linked directly to the Programme for Digital Development of Industry and Infrastructure elaborated by the Chamber. How does this line differ from the previous ones? First of all, it provides a possibility to escape from the deadlock of unproductive conflicts between the politicians: a gridlock between the vision of “Poland in ruin” and the vision of Poland that should be grateful for the peaceful stability it has reached. Neither vision reflects the true state of affairs.

The situation is neither so good nor so bad. Poland has successfully used the historic opportunity to carry out political and economic reforms, which have brought it to the path of development. At the same time, however, as the time goes by, it becomes evident that the currently employed mechanisms used to build a competitive advantage are slowly becoming obsolete. We need a new way of thinking, a new energy boost, new abilities and imagination, to fully employ the potential offered by digitisation.

Anti-innovation policy should be perceived as the main obstacle to the economic development of Poland. It is supported by a political class that has its interest in state-owned companies controlled by the Polish Ministry of Treasury. The policy is a source of conflict between state-owned and private companies, due to the unequal treatment of the two sectors in the process of allocation of budget earmarked for innovation and investments.

The Polish Chamber of Commerce for Electronics and Telecommunications (KIGEiT) believes that the main barrier to ameliorating living standards and to economic development of the country is a anti-innovation economic and social policy. Poland is invariably very low in the ranking of innovation. This results in a very high unemployment rate, which we are not able to reduce below 10%, a very low share of wages in GDP (approx. 35%) and reduced GDP growth rate. Consequently, the gap between Poland and highly-develop EU countries in terms of quality of life stopped to shrink. We present this view everytime we meet with the representatives of the central administration, as well as in the programme documents of the Chamber. The negative effects of this policy are particularly visible in the energy sector, where anti-innovation has become the cornerstone of all the action plans.

After years of vain attempts to improve the situation, we have to answer the following question: How is it possible that the policy of innovative development adopted by the government – supported by development strategies, operational programmes and policy statements approved by the authorities, and intensely popularised by the media – does not interfere with the implementation of anti-innovation solutions?

Up to now, all the analyses indicate that the causes for this situation are numerous. KIGEiT made an effort to consolidate the results of the previous studies and to elaborate suitable countermeasures. The main source of anti-innovativeness is the fact that the transformation strategy of the 90s was built on copying and extensive growth mechanisms, based on the exploitation of cheap and well-educated workforce and wasteful energy economy. These resources have been exhausted, which in the field of politics naturally led to universal call for change. Poles do not want to be treated as cheap labour and do not want to act as foot soldiers in the European division of labour. Finally, the surplus energy resources inherited from the Polish People’s Republics have also been decapitalised.

Once again, the principle that each source of success bears potential of failure has prevailed. An economic development strategy based on copying the solutions proven in the highly-developed country, very popular in the 90s, has become the source of anti-innovation. Despite a decrease in growth pace, anti-innovation has an unconscious, yet significant popular support. Hence, the policy of innovation-blocking in many areas of social and economic life is in some ways an expression of society’s expectations. The generation that suffered the social costs of the political transformation is distrustful of policies that support change and progress. Digitisation, being an embodiment of innovation, led to social exclusion of less educated members of the society. For 25 years education and continuing-education programmes could not catch up with the economic development, causing adaptation difficulties for a substantial part of the population. If we add the interest of the political class, large treasury-owned companies and monopolies, as well as an outdated ways of allocating funds for research and innovation, we can get almost a complete list of causes of the slowdown.

One of the manifestations of anti-innovative policy is the effectiveness of lobbying from the part of state-controlled industries. Politicians support the pressure exerted by the technologically and structurally outdated fuel and energy complex. As a result, it is able to extort form each new government subsidies necessary to maintain the policy of technological and business stagnation. Thus, despite weak economic condition, it is a political force capable of blocking technological transformation of power sector and slowing down the entire economy.

That is why switching political course to innovation is such an important challenge and we have to assume that it will not happen under the influence of one enlightened political decision.

KIGEiT represents the ICT industry – an innovative branch of the Polish private economy, which is the main victim of subsidizing state capitalism. On the initiative of members of the Chamber the Programme for Digital Development of Industry and Infrastructure was elaborated. The goal of the Programme is to monitor the actions of authorities and demand actual implementation of a policy focused on innovation. Thus, the 7th TIME Economic Forum will be entirely dedicated to the practical aspects of a particular type of innovative development, that is – digitisation of all the economy sectors. Below we present the main themes of our next year’s meeting.

1. Innovative transformation of the economy supply system – a coherent programme for digitisation of systemic, civic and construction power industry
2. The digital single market – the main tasks for the economies and societies of the EU
3. Digitally integrated infrastructure development
4. Consistency of economic policy in the field of R & D and the strategy of innovative development

Through the Programme for Digital Development of Industry and Infrastructure we call on the entire society to consciously and consistently implement the presented Programme, though our daily choices decisions and activities, and thus pursue the set goal. 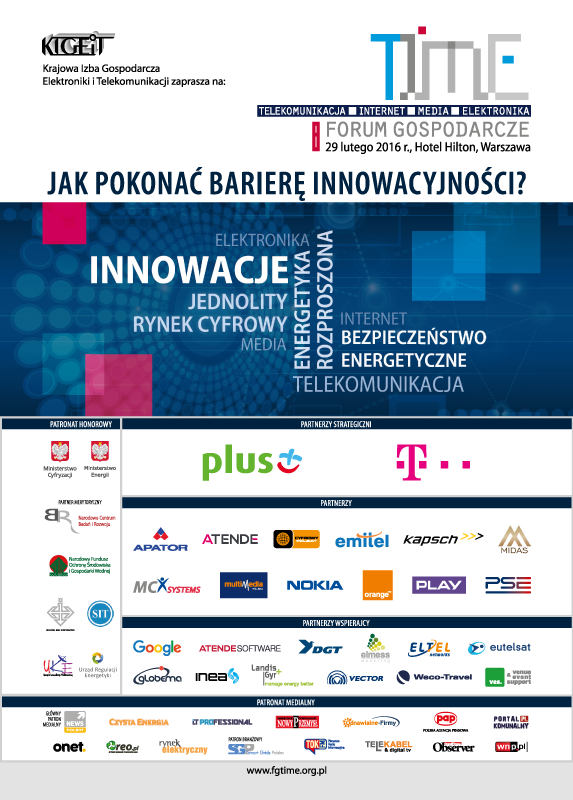